I fail to take any side in this. My heart feels every one involved in the picture. My mind criticises them all. Just zoom out and see for yourself that our value system has come to a halt.

So some males wrap females in fabric to gain control. From which some migrate to new places. In the new places, the females insist on wrapping themselves in a carpet. Say in 30 degrees, this time to make political statements. See, she is the only one not having a mat under. Cause she prefers it around. Armed cops rush in to the scene to address the “public concern”. But how can she untell a statement? By uncovering the fabric of course! Meanwhile bystanders are chilling by the beach and judging the scene in one way or another… And sitting on their own mats by the way, instead of wearing them! Everyone has their own strong opinion. No one knows what they are doing or why. Confused state.

PS. Now Facebook wants me to tag 6 people in there. And I was on the exact same beach just two days ago, so I probably could! 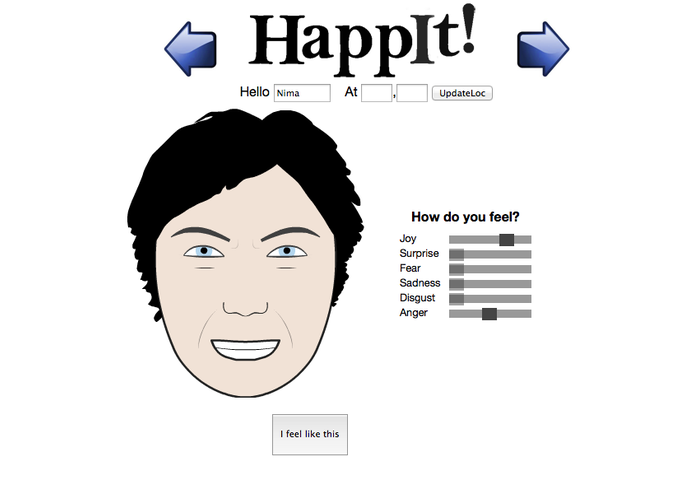 HappIt!
Make it a happy habbit!

I spent the weekend at the reportedly hottest hack event of the globe, TechChrunch Disrupt Hackathon that came to London. I was just spending my vacation, so no serious intention of disrupting the tech scene, especially that I had a terrible fever. But it was quite stimulating and although I was involved in two hacks, they were both finished. With Sohail we submitted our emotional data platform among 89 hacks done by 750 subscribed hackers and Tanja presented it on the stage since my voice was completely lost.

So what is HappIt? From Tanja’s description:

Ever wondered how emotions change over time and vary in different locations [or weather]? Or wondered how your friends are feeling at the moment?

Happit helps you express your feelings, share them with your friends and store them for later reference.

About the idea: Nima was keeping a feelings diary when he was a child and Sohail knows a lot about emoticons, so we created the web app HappIt that allows users to enter and track their feelings; and us and businesses or the government to analyze emotions globally.

How does it work? The app allows you to self evaluate your emotions by rating 6 basic feelings on a scale from 0 to 1, whenever you want to express yourself like a diary or share it with others.

Based on your historic data you can navigate back in time and surprise yourself by seeing how your feelings have changed throughout different times and events, or based on the places you have been to. You can also see your friend’s happiness diary if it’s shared with you or the public.

Check out the video of pitching the idea here or here:

Think of HappIt as the emotional data collection and analysis platform currently using Grimace frontend, built based on Tanahashi and Kim (1999) comic methods which itself seems to be based on Hexadyad primary emotional model by Bruce E. Morton.

So as a part of my productive 10 days vacation spent in London I took the chance to take part in a Data Science Meetup at Cambrdige, a Big Data Meet-up In London and the best of all, the hottest hack gathering of the globe TechChrunch Disrupt 2014 Hackathon that had come to London and we submitted our web app among 89 hacks. This is my portfolio on ChallangePost where I will post more products and hacks in the near future. And here is our hack’s profile Happit that I will write a separate post about it.

Look at me lacking so much sleep in this photo during the Fall SAIH gathering  trip to Nærsnes, near Oslo. The topic this year was open access to scientific journals, etc.

As an observer representing Trondheim local chapter, I attended SAIH’s general assembly 2012 in Oslo from 26 to 28th of October in a group of 5 from our chapter (Read about it in Trondheim team blog). This gathering is the year’s most important meeting of the organization in which the new board members are elected by the representatives of all local branches, new decisions are discussed and voted, new constitution is passed and all formal stuff that might happen in a general assembly takes place. Just for the preparation we  had to read a more-than-a-hundred-page report of goals and prospects, constitution, budget planning, etc. in Nynorsk! And we had to go through it once more in details two (three) days in a row. A tough weekend but that was worth it! At the end we brought home a trophie for the Best Event 2012, for arranging 2012 campaign’s kick-off concert at Familien, for which I had made the poster.

Aside from all this, I was lucky to be in the right time/right place on Friday evening to attend Norske Talenter’s quarter-final, the main Norwegian Talent show, live in Oslo’s Christiania Theater to watch my friends vanishing and appearing and turning into each other. Watch it from TV angle:

Now he’s gone crazy and has told everyone: A man arrested at Large Hadron Collider claims he’s from the future!

Believe me I’m not bullshitting! This man who calls himself Eloi is right. He had left the future long before my departure. He arrived later, however, since he couldn’t time-travel directly and had to stop a couple of “time”s.

I actually met him back in 2076. I was a kid when he picked me up and flied to a far old café: “You’ll make this place happen!”, he said. And I thought he’s mental. Eloi claimed he knows me and I don’t know him yet: “Not yet!”, he was repeating. He wished he had brought me to that weird place only two years earlier, to show me an old man who so wanted to visit me but he was told not to, strictly:

It was the first time I heard this name. Let me keep the details but he told me some stories, and that after the old man died, things turned out to be very different: “Nima should have come to tell you what he knew”. And then he gave me a note:

[You will grow and this time, remember you MUST meet that little kid to tell him what you will know…]

For many years I kept that note, but it was lost before I had to escape my homeland. I knew Persian from my biological mom. So it was not hard to make up stories after I arrived here. And the note was right! Many things indeed became clear throughout my life. But I never figured out what is that I will know and how long I should wait…

p.s. By the way, P=NP in case you were wondering!

After two years of volunteering at “Save the Children” I joint my first cabin trip with them. Of course only for few hours in the chilling part rather than the hiking part (too much nature for me). Thanks to every one in charge, especially in charge of cooking food, when I was just watching!

And also to Dirk who showed some of us the way when we were lost in the woods.

It just happened; So clear and beautiful!
For the first time in my life I can swear that I got to see it. 🙂

Morning: I am in Las Vegas at a Terrible hotel or something! It’s a good one though. Now am living for a walk to check out Las Vegas magic scene and its shops. It seems that the diversity is huge and you might get lost among all the opportunities. I shall head back to Cali tomorrow.

Noon: That walk happened to be four hours, partly dangerous. I chilled out with homeless old soldiers asking for cigarettes, African Americans with their very own American accent and a few Mexicans who couldn’t speak English. I saw real poverty and to a certain extent it seemed that they have really got no opportunities to get a better life. So, There is poverty in US. I didn’t know. Quite an experience.

Night: I got to know new card tricks. All gambling business is something and the magic industry is something else. Among these magicians, right in the Nevada desert, you can meet coolest and smartest people you have ever met.

Here is Heraklion in the Crete island, Greece, next to the salty Mediterranean sea. The center of the photograph, is claimed to be the center of the first civilization in Europe.
It’s taken by a normal Canon PowerShot S2IS, but I’ve used the software Canon Photostich and Photoshop to make the spheric shot. Click on it to get a higher resolution.